As soon as the 9/11 attacks occurred, the Bush administration's eyes were on Iraq, and the intelligence agencies were ordered to get the proof. Detainees were even tortured to force them implicate Saddam Hussein, and false stories about contract between al-Qaeda and Saddam's regime were floated.

Can we make any sense of this fixation on Iraq? I think we can.

Why You Support Terrorists

In an illuminating article by Eric Margolis, formerly of the CIA, he points out an interesting fact. Margolis believe US special operations are directly working on the ground with 'moderate' terrorists in Syria (an oxymoron if ever there was one) to defeat the Asad regime. No wonder we don't want the Russians bombing our al-Qaida allies (you remember them, they are the scum that killed 3,000 Americans on 9/11).

The irony is that a former KGB operative, Vladamir Putin, is working in the US interests more than the current group of Obummer operatives levitra online india. And before you go blaming Barry for the current disfunctional foreign policy, remember that most of this foreign policy is run by State Department Bush hold overs. And most of you voted for Bush - the second time around... shame on you.

What Does Charlie Rose Have in Common with my Cat? 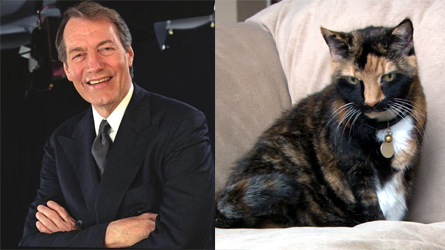 I've finally figured out how the media are like my cat. The media do things that seem absolutely stupid but when you examine what they “report” the proof of their evil and perfidy is evident to see. Well my cat isn't evil but her often stupid and rigid behavior has a clear agenda to it: to manipulate me into getting what she wants!

Last Sunday CBS gave us another example of the Drive By Media's manipulative, propaganda driven agenda by fronting their ever uninformed”reporter” Charlie Rose to interview Vladamir Putin. If you recall in this space I pointed out how Mr. Rose had no idea about some important aspects of Middle East ideologies when he interviewed Bashir al-Assad. Now keep in mind that these reporters don't composed most of their questions and have very little to do with the final edit. That would be the producers job, someone we in the public rarely see. In this case for CBS that would be Andy Court, the man behind the curtain as it were. Reporters are largely pretty faces or pleasant voices with very little knowledge of what is going on in a world they are reporting on but producers are the ones pulling their strings. Then the reporter attempts to pull yours.

We found this analysis and transcript of the Putin interview which included all the bits and pieces that CBS left out. Now to be fair to CBS, any interview of this nature is edited to fit inside the time frame provided by the show. They do not have the same excuse for material on their web site that has no time limitations. If you peruse the transcript the authors have annotated it to indicate what material has been removed so you can skip over the parts that were left in if you saw the interview already. The online video version of the interview is here. Keep in mind that the online interview may have a few pieces the TV version didn't but it certainly doesn't include it all which the transcript notes. After perusing the anotated transcript, I would suggest that many of these edits are fingerprints and proof of what they don't want you to know. Draw your own conclusions.

For anyone considering ever talking to the print or broadcast media, one of the lessons here is to record everything so you can prove how the media lies and manipulates.

Mapping the growth of bases worldwide 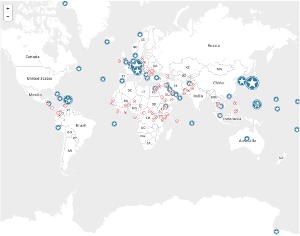 Even though the U.S. military has fewer bases that it did at the end of the Cold War, it has increasingly inserted itself into new corners of the globe with the help of small, often secretive “lily pad” bases; today, there are bases in around 80 countries and U.S. territories — roughly twice as many as in 1989.

Click on the image and then on the symbols for more detail about particular bases.